A Touch of Gray

Posted on September 27, 2011 by Risa Nye • 0 Comments
It says right there on my California driver’s license—Hair: GRY.
I must have changed it when I renewed my license over ten years ago. That would be about right. The year was 2000. I’d grown weary of the increasingly frequent trips to the hair salon to fight the rising tide of gray hair. By then I was doing highlights and lowlights and had completely lost track of what color my hair used to be.
Silver threads started to show up in my hair during my early thirties. (This was just one of several traits passed along by my father.) I had two kids by then, just a young mom, and gray hair was not something I chose to embrace. So I started using henna. But you know how it is, henna is really just a gateway to the bottle. The henna worked for a while, resulting in a darker, reddish shade once I rinsed the gritty green stuff out of my hair. I liked henna and its strong tea aroma, but soon wandered into the world of serious hair coloring.
I can’t remember the first time I got foiled. It’s a strange process involving little pieces of silver squares placed under small strands of hair, which are then painted with various shades of blonde or brown, depending on what needs to be covered or changed for the better. My kids all had honey-colored hair when they were little, a nice blend of gold and light brown. So I went and paid someone a lot of money to make my hair look like theirs. We matched. It all looked very natural, I thought.
My hair was wavy and layered and all the colors swirled together as they did in real life, or the real lives of my kids.
As the years went by, the appointments for color seemed to get closer and closer and the amount of gray that needed to be covered up grew like kudzu on my head. The lowlights took over the highlights at some point, and I got alarmed at what I saw as a never-ending cycle ending with monthly sessions in which I resembled a creature from an old science fiction movie or a wingless bird with excessive silver head plumage.
My daughter, who was in college at the time, started urging me to let my hair go “natural.” And I have to admit, I was curious by then to see what lay beneath in all its platinum glory. What if I let it grow out? What’s the worst thing that could happen?
Well, I’ll tell you. In my case, my hair took its own sweet time growing out, which created an endless stage where it looked like the stratification of colors you might find in the Grand Canyon, for example. There was red, several shades of brown, a spectrum of golds, and at the very roots: a lot of gray.
At nearly the end of my rope, I made an appointment with the guy who’d been doing my color and sheepishly asked if there was anything he could do to ease the painful process of growing it out.
He looked at me and said, “Well, not really, unless you just want me to cut it off.”
So, I gritted my teeth and told him to go ahead and lop as much as he could. At least I’d lose a few inches of past dye jobs. He cut it as short as it had been back in the dreaded pixie cut days of my youth. I hated it that short, but sacrifices had to be made.
Not surprisingly, my hair was mostly pepper, with a heavy sprinkling of salt.
And then, the silver began to take over. It wasn’t so bad after all. I came to enjoy the freedom from dyeing. I consulted a make-up artist and a color expert about changing my color palette to compensate for my new hair color. Good news! I now have tiny swatches of fabric in the colors I already like.  I checked out some new product to add shine. I bought purple shampoo that gets rid of bad juju from the atmosphere that makes my hair turn yellow. But I had yet to convince my husband that silver can equal sexy.
Right around that time, I wrote a short story about a graying, middle-aged woman with a Walter Mitty fantasy life. In her flights of fancy, she is known as “The Silver Fox,” and has hunky young guys panting after her in a variety of scenarios. I showed it to my husband. He liked the idea of the Silver Fox. Let’s just say that his resistance to my hair color was short-lived. 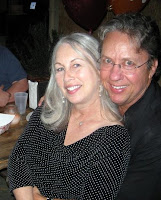 I notice that there are more and more of us proud silver-haired women around, at least in the Bay Area. We give each other a discreet nod of the head when we pass, not unlike Porsche drivers flashing their headlights at each other. We know the guts it takes to let it all hang out like this. I think we deserve a medal for bravery.
You can make mine silver.
Filed Under: Uncategorized, Zero to Sixty in One Year

Dad’s Guide to Life My dad was a teacher, and like many outstanding teachers, he never took time off from teaching. Sure, there were vacations and summers, but he was always on the job. If no students were around, he always had my sister and me. I have put together some of his most important… END_OF_DOCUMENT_TOKEN_TO_BE_REPLACED

Filed Under: Uncategorized, Zero to Sixty in One Year

Song for My Father

Tomorrow would have been my father’s 92nd birthday. He’s been gone ten years now. Sharing a laugh on Father’s Day My dad always told me that I was a writer. He said this with admiration, I think. He encouraged me to write and would often help me when I got stuck.  When I was taking an… END_OF_DOCUMENT_TOKEN_TO_BE_REPLACED

Moving on once again.

Yes, it’s that time. And while these are actual boxes in my actual house, they do not contain my personal memories. But it’s a fairly accurate portrayal of how much stuff I still need to wrap up  before I leap into the next month-long look back. For those of you who have been along for… END_OF_DOCUMENT_TOKEN_TO_BE_REPLACED

Filed Under: Uncategorized, Zero to Sixty in One Year

From the Ground Up

I realize that the last post jumped ahead of where I am chronologically, but it seemed like the right thing to do.My rules; I break them. But I need to backtrack to the whole rebuilding drama. I kept a journal that began with the following entry on May 14, 1992:Our permit is approved! We meet… END_OF_DOCUMENT_TOKEN_TO_BE_REPLACED

Filed Under: Fire, Zero to Sixty in One Year