Last year, I completed my master’s degree in Creative Nonfiction, and chose to write my thesis about events surrounding the fire that destroyed our home and our neighborhood in 1991. I’ve covered it in previous posts here and in a number of published essays. This is one of the chapters from my thesis-that-I-hope-will-grow-up-to-be-a-book-someday.  I’ve written  about things I’ve come to think of as artifacts: the “things” I lost that only live in memory now.  And yes, things can be replaced…but not all of them. The pink dress is one remnant of my former life, my life before the fire, that I can never replace. Writing about these things is the only way I can hang on to some of those remnants…

If a travel agent hadn’t messed up our reservation and nearly left us without a hotel room in New York that time, I never would have found the pink dress in an upscale beach town’s second-hand store. As an apology for his mistake, which resulted in our embarrassment when we attempted to check into our hotel and learned that they’d never heard of us or our reservation, the travel agent comped us to a weekend stay at the Ritz Carleton in Laguna Niguel.
One afternoon my husband and I tore ourselves away from the luxurious seaside resort to wander through the nearby town. I’d spotted a second hand-shop on our way to the hotel and thought I might be able to find something to wear to the fancy wedding we’d been invited to attend.
“What I’m looking for,” I said to him, “is something someone wore to the Oscars and then gave away.” And once I got inside the store, I found exactly that: a glittery rack crammed with drop-dead beautiful dresses that looked as though they’d been down a red carpet at least once. I had found the mother lode of cast-off couture.
I tried on a mermaid dress (complete with tail), a red sequined number, a champagne-satin pleated and draped disaster… and then I saw the pink dress.
Silk chiffon in ballerina pink–just a whisper of color–with a handkerchief hem; dropped waist, banded in pink satin; and sheer sleeves with the same pink satin at the cuffs. A light sprinkling of rhinestones on the bodice added a touch of bling. It was love at first sight.
Just one problem: it was two sizes too big. But I bought it anyway, figuring I could get it altered in plenty of time for the wedding.
Once we got home, I took the dress a nearby bridal shop. I was sure they could cut the dress down and shorten the sleeves for me. I tried it on in front of a seamstress who wore glasses on a chain and a pincushion on her wrist. She marked the dress, pinned it, pulled it in, and showed me what she would do to make it fit. “See?” she said. “It will fit like it was made for you.”
A week later, I went back to the shop and twirled in front of the mirror in my pink dress. Perfect! Sleeves, length, bodice–all shortened, tweaked, and modified. The gal was right. It did look like it was made for me.
I found some pewter shoes–not too flashy–just barely silver, the color of the rhinestones when they reflected light.
Oh, that perfect, lovely pink dress.
I wore it twice, once to the wedding and later to a New Year’s Eve party. We posed for a picture at the house before we left for the wedding. Just one picture. And then off we went to dance under tiny, twinkling lights. The handkerchief hem swirled and twirled around me like cotton candy.
On the day of the fire, as I grabbed our many photo albums,  I also found a roll of undeveloped film in a drawer and tossed it in my purse as we fled the house.
With everything else we had to get done over the next few months, getting that film developed slipped way down on my priority list.  I eventually dropped the roll off, and when I got the pictures back, I happily flipped through the images I’d long forgotten… and stopped cold when I got to the one we took before the wedding:  the pink dress. It was as though I’d found a long lost friend, missing and presumed gone forever.
We are in prom-picture formation: my husband has his arm around me; our hands are joined in front of us. He looks sharp in his tuxedo, bow tie, crisp white shirt, and 80’s glasses.  My hair is up, my silvery earrings sparkle, and the light catches in the soft folds of satin.
The pink dress: diaphanous, ethereal, light as a pair of fairy wings. 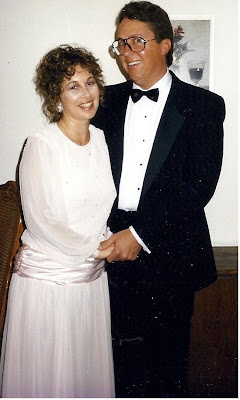 With many thanks to It Builds Character for publishing this post about Making Big Decisions based on thread count. I’m always happy to be a guest at  IBC, where I receive a very warm welcome. See what I mean: by reading it here. (Complete with kind introduction by the great Chimomwriter herself.)

…on a desert island with only one album to listen to.You have to chose. Go ahead, I’ll wait. This was a class assignment during my last semester at Saint Mary’s: choose the one album you would take with you to a desert island, assuming you could plan ahead for this, and could also figure out… END_OF_DOCUMENT_TOKEN_TO_BE_REPLACED

The Rise and Fall of Ms. Fixit

As I pressed the button to open my garage door  yesterday, I paused to notice the black smudges that still form a border on the inside of the door. And this is the story of how they got there. (Seen as a guest post on It Builds Character a few months ago. History buffs will… END_OF_DOCUMENT_TOKEN_TO_BE_REPLACED