The whole thing started when my husband and I took a day trip to Tijuana. We were in San Diego for the weekend, and spur of the moment decided to cross the border for a few hours. We inched our way through the checkpoint, and found a marketplace to explore. We hadn’t gone far when we spied a real treasure: a  black velvet painting of Elvis in a pink wooden frame.

We knew we had to have it, but my husband insisted on doing a little bargaining anyway. I think we haggled our way down to four bucks. It’s an investment, right?

(Some background: Our daughter Caitlin was born in December of 1977, the year that Elvis passed on. Coincidence? We always suspected otherwise. This portrait of a late-career, lounge-version King was destined to be hers.)

That year, 1990, we buried the painting deep inside a huge TV box and presented it to her on her birthday. At first, her eyes popped–she couldn’t imagine that we’d give her a TV for her 13th birthday. She tore open the box, dug into the crumpled newspapers and pulled out the velvet painting of Elvis. We gave her some real presents too, but Elvis took the cake gift-wise.

The following June, she re-gifted Elvis–returning  the painting to my husband for his birthday.
He had the precious work of art hanging in his office in San Francisco, which is the only reason it survived the October 1991 fire that destroyed our home and thousands of others in the Oakland and Berkeley hills.

I think Caitlin would say her favorite birthday gift  that year was the safe return of the King.

A few years later, Caitlin went away to college in Pennsylvania.  Buried  in an email containing the details of one of her fun-filled weekends, she mentioned that she and a friend had gone into Philadelphia and had their noses pierced.

I read on, waiting for the “just kidding” follow-up. There wasn’t one.  A nose ring?? Gah. But there wasn’t anything I could do or say about it…or was there?

That December, Elvis arrived at her dorm with a small stud in his nose.

And that’s when things began to escalate. 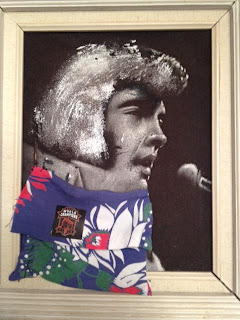 A Birthday Celebration, Once Again!

In honor of my son’s birthday today, I’m posting a re-run. I used to tell him this story, or parts of it, every year on his birthday. Now that he’s a daddy, maybe he’ll carry on the tradition when his little boy turns one next month…    So tired, tired of waiting, tired of waiting… END_OF_DOCUMENT_TOKEN_TO_BE_REPLACED