It’s prom season! Time to pull this piece out again and give it a twirl.

I wandered into the makeup hub at Nordstrom a while back and the joint was jumping. As I strolled from counter to counter in search of the latest gravity-defying lotion, I noticed that the make-up artists were out in force, their black kimonos cinched around their waists, as they intently patted, smoothed and stroked shadow, blush, mascara and gloss on willing upturned faces.

Instead of the usual middle-aged matron in search of the fountain of youth in a new lipstick or moisturizer, however, the occupants of the high black chairs were teenage girls. Upon closer inspection I noticed that the girls all had their hair done in cascades of curls or upswept twists.

Prom night!  It had to be.  Anxious mothers stood by, a mixture of envy, pride and shock on their faces as these big little girls turned into sophisticated young women before their eyes. With brows shaped and penciled, eyelids powdered and shimmery, blush mimicking the natural glow of their young cheeks, the girls looked like they were in a princess factory—reminding me of one of my favorite fairy tales, “The Twelve Dancing Princesses.” 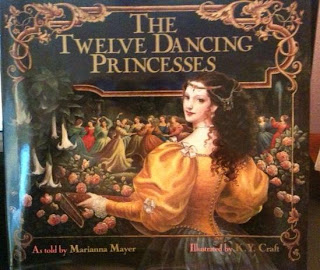 One of several copies I have of this story

The princesses would dress up every night and disappear though a secret tunnel to dance the night away with handsome princes. They would return the next morning, their shoes worn out from dancing.  I loved that story, partly because of the new shoes they got every day, but I also liked the part about getting dolled up like that every night, sneaking out, and not getting caught.

I was also reminded of having my makeup put on when I was a girl—but not by a black-smocked woman with perfectly applied lip liner and three shades of eye shadow. And it wasn’t my mom doing the make-over, either. No, it was my dad who brought his dinged-up metal makeup kit home from the high school where he taught drama, and it was he who applied the exotic blue eye shadow and red lipstick the year I dressed in a red silk pajama outfit he had brought home from Hawaii. He applied eyeliner that extended past the outer corner of my eye, then added a little of this and a little of that until I looked very exotic indeed–or at least what might be considered exotic for a seven-year-old. 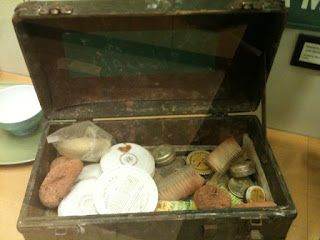 One year I was a gender-bending Zorro for Halloween, and for this I got a grease pencil mustache that was cool to look at, but kind of offset by the red lipstick and pigtails I wore. My cape and mask completed the ensemble. Instead of a sword, though, I carried the cane I used for my tap dance routine.

Many years later, my older son landed a part as Wally (Emily’s little brother) in the local community theater production of “Our Town.”  It was strictly do-it-yourself on the makeup, so I found myself applying eye shadow, mascara, foundation and blush on my fifth grade son, who would spend Act III sitting in a chair during the powerful cemetery scene, which got to me every time.

“Now here’s something I never thought I’d do,” I said as I told him to look up and sit still while I curled his eyelashes on opening night.  It was just the beginning of his acting career, and he went on to sing, dance and act in a number of shows through high school, college, and beyond.  Still, it was a full circle moment–Dad to me to my son– when I handed him a tissue and told him to “blot.”

As I wandered away from the busy cosmetic counters that day, I hoped that all the lovely princesses-to-be would dance the night away . . . and totally wear out their shoes.

And now, a few words from Hedwig, who knows a lot about putting on some make-up. And there’s a sing-along too!

6 Responses to A Made-Up Story