To be fair, the inquisitive young woman from New Zealand sitting next to me at the A’s vs Mariners game at Safeco Field in Seattle had never been to a baseball game before. Naturally, there was a lot of stuff she didn’t know—like which stadium she should go to in order to watch a game. But more about that later.

Now, I’ve been attending baseball games since I was in elementary school, and while I have not memorized the rule book (since I haven’t actually seen one), I do know some of the finer points of the game. So once I tuned my ear to my neighbor’s Kiwi accent, I tried to answer as many of her questions as I could. I have to admit, some of them had me stumped.

But let me backtrack for a second. Why was I attending a game in Seattle instead of in Oakland, where I live?

My husband and I had planned to stay there for a couple of days before we were to meet up with our Backroads travel and hiking companions in Anacortes, WA. And what do you know? The A’s happened to be in town during those two days! So we could see yet another baseball game. (We see plenty at home, believe me—both in San Francisco and in Oakland. But I am nothing if not a good sport.) I’d never been to a game where I wasn’t surrounded by the home team fans before, so this would be interesting. Possibly. The tickets we got online were pretty good—nearly right behind the plate on the first base line.

And so, on a pleasant Friday evening, after a busy day of sightseeing, we walked over to Safeco Field. Once we got to the seats, I noticed the young woman sitting alone next to me, sporting a stiff, new Mariners cap and scribbling notes.

I was curious about the note-taking. She wasn’t going to keep score that way, obviously, so she must be on some sort of mission that involved close observation of the game. After a few minutes, we started to talk and I found out what that mission was. Turned out to be quite a story, and attending the Mariners game was a sort of penance for her. But I’ll let her tell it here, in her column in the Seattle Times:

A swing and a miss 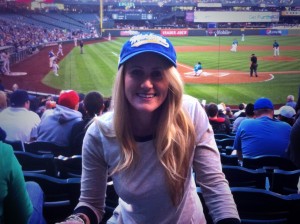 Finally, the night before she was to return to New Zealand, Olivia goes to the right game and looks for men in tights and knee-high socks. The guy sitting behind us took this picture. My right arm, clad in A’s green, is at left (photo courtesy of Olivia Carville)

As I mentioned, I’ve been to countless baseball games since the first one I attended at drafty old Candlestick Park. Some stuff you just pick up by osmosis. Some things I just know. Not wanting to appear like Ms. Baseball Know-it-All (which I am not and never will be), I promised Olivia that I would not become an ear basher as the game progressed. So I waited. And watched the game.

“Why do they pitch from that hill?” Olivia asked. (Good question. Physics!)

“How many batters will there be in an inning?” (It depends.)

When one of the A’s hit a single and stood on first base, she asked, “Why are there two gray guys on the base now?” (One’s a coach.)

“Why do they skid like that?” (I heard “skeed” and had to ask her to repeat what she’d said. “Skid?Ah, you mean slide,” I said.  “Because they like to get their uniforms dirty.”)

“How much does a bat weigh?” followed by “What are they made of?” (No clue about the weight, but did identify the type of wood.)

And speaking of bats, one of the Mariners let his bat fly out of his hands, launching it well into the stands, where it struck some kid on the leg after ricocheting off a seat. “Wow!” I said. “I’ve never seen a bat fly like that!” Olivia grabbed her notes and sprinted over a few sections to where the ushers and staff were clustered around the unlucky kid. In a moment she was back, grabbing for her phone so she could get a picture. 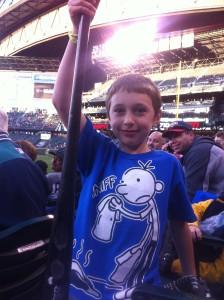 If this poor kid hadn’t been hit by the flying bat, I’m not sure what Olivia’s angle would’ve been. Nothing on the field could top that jettisoned bat for excitement.

“How fast do you think it was going?” she asked when she arrived back at her seat. (Very fast.) 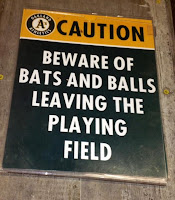 It wasn’t the most fascinating game to watch. I think Olivia began wishing it would end sooner rather than later. Around the fifth inning she said, “Well, this is moving along quickly.” I inwardly cringed. This is something you never, ever say out loud at a baseball game. The Baseball Gods will hear you and the next thing you know, it’s a tie game that will go into extra innings and you will hate yourself for making the game last another three torturous hours. As it was, the game ended at around the 2 ½ hour mark—which was plenty long for the intrepid, but antsy, Kiwi reporter sitting next to me.I know she was looking forward to the moment when everyone stood up to sing. After the seventh inning stretch and the boisterous, but ultimately disappointing, sing-a-long of “Take Me Out to the Ballgame” ended, she asked, “What are Crackerjacks?” That question was right in my wheelhouse.

It was fun to see some of the stuff I’d pointed out during the game appear in her  follow-up article (the rituals batters go through in the on deck circle, the fine art of sunflower spitting from the dugout, etc.). And the game wasn’t completely dull: she did get to see some  home runs, a couple of double plays, and a runner getting picked off first base (“Well, that’s embarrassing,” she said), in addition to that foul bat.

I enjoyed reading both of Olivia’s articles in the Seattle Times. She’s got a great style, a wicked sense of humor, and was a good sport about the whole soccer-and-not-baseball snafu.By the way, the final score of that game (in only nine innings, despite tempting fate): A’s 6, Mariners 3.

Filed Under: baseball
← Three new reads: For empty nesters, college grads, or seekers of grace
Are we destined to become Glassholes? →

One Response to Clueless in Seattle