Heart on a Red Sleeve

It was destined to be one of those bad shopping days. Nothing fit, the colors were wrong, everything was too young, too old, too not-right. The racks in all the usual good luck places were out of magic. No marked-down sale items on hangers calling my name as I walked by. I remained unmoved by their fall from retail grace. Maybe I just wasn’t under the usual spell of enchantment, oblivious to the charms of the pianist gliding her fingers over the keyboard as she played  show tunes and standards designed to make shoppers reach eagerly for their credit cards, trancelike, at the counters throughout the cavernous store.

Half-heartedly running my hands along fabrics in spring colors, occasionally taking a hanger off a rack and putting it back—this was worse than I anticipated. What was I doing there anyway? Was shopping the best thing I could think of to do right then? What did that say about me?

And then something caught my eye. It was a red jacket, a blazer. The color was more of a  sedate scarlet than a perky cherry red; it had a quiet dignity that didn’t scream “red” so much as say it:  I’m red. Don’t make a fuss.

I heard a voice then. A saleswoman. “May I  help you find anything?”
“No, ” I said. “But thanks.”
She introduced herself as Esther. I nodded, thanks again, and reached for the jacket.

As if on a blind date with someone I had doubts about already, I walked back to the dressing room with it, certain to be let down. I tried the jacket on, avoiding my reflection. I knew the harsh lighting would reveal the dark circles under my eyes, my washed-out skin and dull hair. Finally, I looked in the three-way mirror. I liked it, but the sleeves were several inches too long. The sign on the way into the dressing rooms designated a day too far in the future for alterations on purchases made that day. It was not to be, this red jacket.

Esther knocked, then peeked into my dressing room and cocked her head.
“We can have those sleeves taken up and have it ready for you by, oh, let’s say next Tuesday.”
“No,” I told her, shaking my head slowly. “I need it for tomorrow.”  I took one more glance in the mirror, and then began to take the jacket off.

She looked at me for a moment. “Can you find something to do for about an hour?” she asked. “We can have it ready for you then. I’ll be at lunch, but someone else will keep an eye out for you.”  I nodded, mumbled my thanks, and waited for the seamstress to come in.

A short woman with a pincushion on her wrist entered the dressing room moments later, quickly pinned up my sleeves, then gestured for me to go as I shrugged out of the jacket.

I went out into the April sunshine and found a pretty card in a nearby stationery shop. I sat down and wrote a note to Esther, telling her that my father had always liked me in red and that I would wear the jacket at his funeral service the next day and how much it meant to me that she was helping me, and as I wrote I could not keep the tears from falling. Shoppers passed me by, enjoying the afternoon, pretending not to notice the sobbing writer on the bench pouring her heart out to someone she would never see again.

I took out my cell phone and called my sister, letting her know that I had found a nice red jacket and that by some miracle of understanding, through the kindness of a stranger, it would be ready in time for the service.

When the hour was up, I left my note for Esther, claimed the red jacket in its zippered bag, and drove home in tears.

I will always be grateful to the kind woman who saw something urgent and desperate in a grieving daughter’s face. All these years later, every time I see that flash of red in my closet, I think of her—and how much my father would have loved hearing the story about Esther and the red jacket. 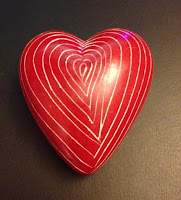 Filed Under: dad, Zero to Sixty in One Year
← Celebrity Crush Redux
Free advice! The Wisdom of Many Mothers →

16 Responses to Heart on a Red Sleeve