My husband and I were in London that day in 2001, when everything changed back home.
We were visiting our daughter and son-in-law, leaving our older son to look after his brother here in the Bay Area. The newlywed couple were traveling the world for a year, and my husband and I decided to join them during their stay in the U.K.

On September 11, we had visited Buckingham Palace and the British Museum, unaware of the events unfolding across the ocean. We went our separate ways after the museum and I rode back to our apartment in a cab. Late afternoon by then. The radio in the cab broadcasting the news…it made no sense. The words, the events, didn’t really sink in as I heard them.

Once I got back to our apartment, I turned on the television and saw what everyone else had been seeing for hours. One by one, the others arrived, having seen the news footage in pubs and shops along the way. We watched the BBC together, in silence. The same scene played over and over. We watched, stunned and unbelieving.

I called home to check on the boys. Myles said, “You will be coming home to a different place.”

On the night of the 14th, we had tickets to a concert at St. Martin-in-the-Fields in Trafalgar Square. The program was listed as Bach and Vivaldi.

Union Jacks all around the city flew at half mast, and earlier in the day we’d stood outside St. Paul’s for a memorial service. We were too late to get inside; people had started lining up at 1:00 a.m.for the morning service. Three minutes of silence all across the city while we rode on the tube to get there.

Along the way, we ducked into smoky pubs to see if anything else had happened back in the U.S. The pubs were full of people: men in business suits and ties stood next to construction workers, all of them drinking, smoking, watching the silent televisions. 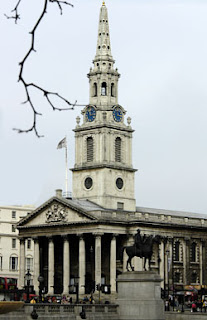 According to my journal, the concert was “beyond wonderful,” the church bathed in candle light, the sound surrounding us, the emotions overwhelming.

A late addition to the concert that night was Barber’s Adagio for Strings. In an earlier post, I was able to include the video of this heartbreaking and powerful performance. It has since been removed, so I can’t make it available here anymore. After the tragic events at Columbine in 1999, our Oakland Symphony performed the piece, and it had the same emotional impact on me then. It still does, any time I hear it.