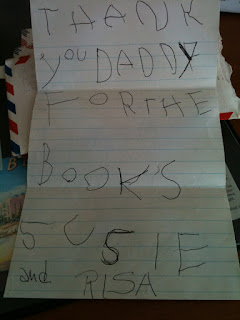 Awwww. This is the thank you note I mentioned earlier — the one my sister and I sent to my dad. It was tucked inside the envelope with my mom’s letter to him. A pretty good signature for a not-quite-three year old! ( I may have had some help.) My sister Susie and I found a packet of letters –23 in all — written between June 29th and August 7th, 1954. (Postage: 6 cents for airmail.) My mom and sister and I were camped out at my maternal grandparents’ small apartment in Detroit for several weeks while my dad stayed in New York, doing his coursework at Columbia.

These letters provide the only real insight I have into my personality at such an early age. I also get a sense of my mother’s frustrations with the whole situation: being away from my dad, two kids underfoot with not enough to do, and her own smothering parents! Not a fun time for her (or us, it sounds like).

From the letter of July 21, 1954: “The girls talk about their dear Daddy all the time. Risa goes around calling you Sam now. Oh yes, she has a new saying, among others. If she’s spoken to authoritatively, she turns around and says ‘You talk nice to me or I’ll run away!’ I can’t imagine where she picked that up, but she has repeated it several times already. She’s singing one of her own compostitions about daddy right now. This is bound to go on all night!”

I’m thankful that  my dad saved the letters. And why wouldn’t he? They served as a reminder of how much he was loved and missed by his wife and young daughters.

Filed Under: Uncategorized, Zero to Sixty in One Year
← Cubby!
Kindergarten →