The Blessings of Doing Chores. Really. (Or maybe this should be called "Chores–huh! What are they good for?")

Posted on December 7, 2013 by Risa Nye • 8 Comments
Dusting is fun.
At least, that was the name of my favorite chapter in my favorite childhood book, All-of-a-Kind Family by Sydney Taylor. The story takes place in New York City at the turn of the 20th century. Mama and Papa and their five daughters are a Jewish family who live simply on the Lower East Side. The book is rich with detail about daily life in a house full of daughters.

In “Dusting Is Fun,” Mama came up with a clever idea to make sure the girls did a good job of dusting the front parlor, a job that no one wanted to do. Who couldn’t relate to hating chores? After hearing the girls moaning and groaning and fighting over this chore, Mama knew she had to think of something. So she dug into her sewing basket and hid buttons in hard-to-reach places in the dusty parlor and its heavy curlicued furniture. The proof of a job well done was an apron pocket full of shiny, colorful buttons.

Naturally, the girls took on the challenge and clamored for the chance to prove their mettle as good little housekeepers. To up the ante, this smart Mama changed her game plan from day to day: Sometimes there were no buttons, sometimes there were only six or 10. And one memorable week, Mama hid buttons “plus one shiny copper penny.” This was incentive enough to make sure that each little girl gave her all to her dusting duties.

When I became a mother and was faced with the job of getting kids to clean their rooms, or, as I often pleaded, to just clear a path, I thought fondly of those simpler times when a button or perhaps a penny was a great motivator. I wondered if my kids would grab a dust cloth for anything less than a stack of crisp bills. I did have my ways, however. Being big fans of the “Sesame Street” game show takeoffs, we instituted what I called “Keep or Dump,” which involved its own theme song and sound effects reminiscent of the old “Truth or Consequences” program.

Basically, this was a sneaky way of getting the kids to sort through their stuff and decide what to keep (woo woo!) or dump (bzzzzzz). As long as we kept it game-like and brief, by the time the session was over, old toys were discarded, books were shelved or set aside and everything was put in order.

A great resource for me in those days was a book titled Pick Up Your Socks and Other Skills Growing Children Need! by Elizabeth Crary. In her chapter on household jobs and responsibility, she covers how to teach a task. It’s all well and good to cross your arms, position yourself in your child’s doorway and issue an edict to “clean your room,” but my youngest (when he was pretty young) said to me on one such occasion, “Tell me how.” Knowing how to break down a daunting task like cleaning a room can help a young child accomplish the job and feel pretty good about himself. 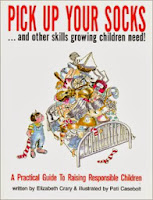 The best technique I remember from Pick Up Your Socks involved picking everything up (not just the socks) off the floor and piling it on the bed. Then the sorting began. Like things went together: books, toys, those orphan socks, clothes, papers, etc. Once everything was sorted into categories — a teaching moment for younger kids — it was simple to put things where they belonged: the bookshelf, the toy basket, the laundry hamper, the wastebasket or the “get-rid-of-it pile.”

Eventually, the kids devised their own systems for getting their chores done. And after they got older, the theme song and “let’s make it a game” aspects weren’t necessary. But I saw firsthand the benefits of teaching them early on to be self-reliant and responsible. As adults living on their own now, I know that they actually own cleaning products and use them regularly. They no longer have to use the put-it-all-on-the-bed system. At least, I don’t think they do.

One of my newer favorite books, The Blessing of a Skinned Knee by Wendy Mogel, devotes a chapter to “The Blessing of Work.” She makes a great argument for chores: Children learn that they are both loved and needed. She writes that “doing chores — looking after themselves and helping the family — are their first good deeds.”

Today’s parents wouldn’t get too far hiding buttons in the parlor, but they could go a long way toward helping their children become self-reliant and responsible adults by making sure that chores are a regular part of family life. Mama knew best after all.

This post originally appeared in the San Francisco Chronicle

Filed Under: Uncategorized
← OK, December: Bring it!
A gift so nice, I got it twice: The Indoor Noisy Book →

8 Responses to The Blessings of Doing Chores. Really. (Or maybe this should be called "Chores–huh! What are they good for?")