The Rise and Fall of Ms. Fixit

As I pressed the button to open my garage door  yesterday, I paused to notice the black smudges that still form a border on the inside of the door. And this is the story of how they got there. (Seen as a guest post on It Builds Character a few months ago. History buffs will remember when we used to actually “hook up VCRs.”

I said, “How hard could it be?”
“Those words will be engraved on your tombstone,” my friend Chris replied, as we hoisted her new television into its cabinet.

I just didn’t see why two able-bodied women had to wait until the man of the house arrived home to hook up her new VCR. The two of us read the manual, followed directions, did a bit of heavy lifting, and got the job done. Easy peasy. I actually enjoy taking on small repair jobs. I have fixed plumbing, replaced light fixtures, changed furnace filters, dealt with ailing appliances, put furniture together. No pink tools for me, either. I am woman, etc.

So it was with a great deal of confidence that I went about replacing a damaged piece of my garage door mechanism. While backing out of the garage, one of my kids got a little too close to the doorframe, putting a big dent in a section of the trough-like metal.  To repair the damage, I ventured out of the city into the industrial no-man’s land where the garage-door-opener-parts place squatted among all the other nondescript boxy buildings. I had the dented piece of metal with me, so there could be no mistake about what I needed to buy.  I received a few skeptical looks from the guys behind the counter, but I’m used to that. I have purchased ball cocks at the plumbing supply place, and I am cool with that.

Once I got home with the replacement piece, I pushed the small red button that started the door on its upward journey. As the door rose, its mounted wheels rolled up the “track” like the wholesome little wooden trains from Sweden that are cute but too expensive to buy.  I suddenly noticed that the missing piece of metal track served a very important function.  Without this piece of track, the door sensed something was out of kilter and began swaying slightly, which started a Rube Golberg-like series

of events resulting in the wheels popping out of the track.  Each time I tried to undo the damage and raise or lower the door, more wheels flew off the track, and the door began to take on the appearance of a large white whale, sashaying in the surf. I felt as if I were in my own bad sitcom: Lucy, all alone, trying to stop the crazy machine before Ricky finds out. 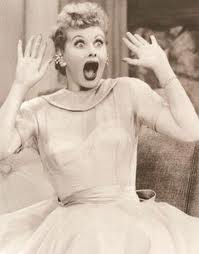 After a few heart-stopping moments, the door had popped all its wheels and hung, hammock-like, from two strands of twisted cable wire as thin as spaghetti.

I started shaking as I wondered what the hell I had done. Would the door fall down?  Would it  pull the rest of the house with it? How hard could it be?!  Maybe these words would be the caption under my picture: “Local Idiot Attempts Home Repair Job.”  I ran upstairs and grabbed the phone. I called the number of the place that had installed the garage  door and begged them to come, NOW.
“Well,” the guy drawled, “it’s almost 5:30. What with traffic and all, that’s going to be time-and-a-half.”  I assured him that I didn’t care about that, my house was about to fall down, it was all my fault, and I needed help immediately. In the next moment, my son came home. His jaw dropped, first when he saw the garage door, and then when he saw me, crouched on the nearby steps, shivering and saying, “Just go inside. This is the stupidest thing I’ve ever done. GO!”  He went.  Meanwhile, a couple of my neighbors drove by, waved and pointed at the Sway-backed Garage Door of Doom.  “Something wrong?”  No, no, nothing.

Time crept by. More kids came home.  I did not want to have my husband arrive while I was curled up in the fetal position, cursing my stupidity. Finally, the garage door repairman arrived. He was a titan with muscular arms, long curly black hair and a neat goatee.
I asked him “Is this the stupidest thing you’ve ever seen?” and,  “Can you fix this?”  He paused a moment, and I think I saw him trying to stifle a smile. “I can fix it,” he said.

And he did. He lifted the door, Atlas-like, with his bare hands.  His grease-covered fingertips made a dainty border up the sides of the white garage door as he put the wheels back on the track and secured the new piece of metal to the doorframe.
He pushed the red button; the door went up and down.
I paid him. He left.
His fingerprints are still there, though — a reminder that some things are harder than they look.

Filed Under: Uncategorized
← A Musical Interlude with Sopranos
Stranded… →

2 Responses to The Rise and Fall of Ms. Fixit