Probably the most important lesson I learned from my mother took place in a fitting room in Macy’s lingerie department. She believed in my having the proper support from the very beginning. Once we started to develop, my sister and I got whisked off downtown to Macy’s.  When it was my turn, my mother and I followed the saleslady into a tiny room with three-way mirrors. She undraped a tape measure from  her shoulders, deftly wrapped it around my chest, and fitted me for my first bra. Even though I was very young, I got the full attention of the saleslady  and my mother as I turned this way and that to model.

My grandmother hadn’t paid any attention to my mother when she reached that stage of development. Growing up, we heard stories about how a friend’s mother had been the one to take my mother bra shopping, and also taught her how to take care of herself during her periods. But the bras came too late, according to the stories.  The damage had already been done. At a  young age, my mother resembled the tribal  women you used to see in those old National Geographic magazines–the ones whose breasts lay nearly flat against their bodies.

My mother had to have special bras made for her, since  underwires didn’t exist back then. 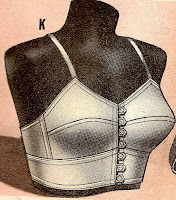 She kept those handmade bras forever, until my sister and I finally convinced her that she could branch out and go for a leopard print push-up and why the hell not? We convinced her that underwear didn’t have to just be utilitarian and boring. So we taught her something too.

Not only did she make sure we got properly  fitted bras, she also made sure we had black ones to wear under dark clothes. This caused quite a stir in my junior high PE locker room, and got a rise out of any nearby boys when an errant strap peeked out of my blouse during class.

We always hear about women not wearing the right size bra. I’ve seen reports that say around 80% of women fit that profile. Most women hate to go bra shopping, so they keep wearing bras that fall down on the job. It doesn’t have to be that way.

The lesson I learned from my mother is that it’s  worth every penny to get a bra that fits right and gives you the silhouette you want.

It was just one way she tried to take care of her girls, and ours.

Filed Under: advice
← The Call of the Void
Gradual School, Revisited →

14 Responses to Uplifting Lessons from Mom