One by One: Off they go…

When our three kids were little, we spent part of our summer vacation at a beautiful mountain lake. As we watched the kids play in the sand or splash in the icy water, my husband and I realized the day would come when they’d get too grown-up or too busy to spend lazy days with us on the beach.  By the time our baby graduated from high school, we’d be over fifty. A long way away… 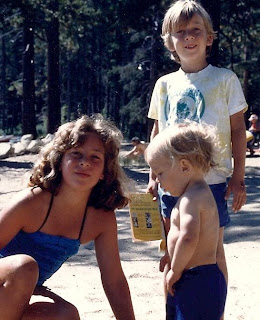 And then, there we were—back to the two of us in the blink of an eye.        The kids left home in the order they arrived: our daughter first, followed by our two sons.  The summer before she left for college, when she was jumping out of her skin, I taught her how to knit. I wasn’t sure what else I had left to teach her. I’m sure I overlooked a few things.
In August, when it came time for her to fly east for her first semester away from home, I drove her and my husband to the airport. Back when you could accompany people to the departure gate, I came along to wave goodbye. I held back as they got in line to board.And then I gave her a big hug and a brave smile. She hitched her backpack over her shoulder and boarded the plane.
Without my daughter around, I lost my best company for girl talk, knitting, and shopping, and my husband lost his companion at baseball games. The boys carried on as if nothing had really changed. There was some jockeying for position at the dinner table and a bit of groaning about doing their sister’s share of the chores. We got used to being four instead of five.
Three years later, we sent our older son off to college in LA—a mere hour’s airplane ride away. Although I worried about him at such a large school, he found his niche among fellow actors and writers immediately. He called once a week and gave us the headlines about his life.     Two out in the world; just one left at home.
We wondered how the family dynamic would survive the shift from a 2:2 parent/child ratio to the double-teaming  our youngest would face for the next five years. We had not been an “only child” family for nineteen years, and were too naïve to appreciate it then. Does anyone? Now, we were down to one child, the youngest and quietest.What would happen when he was allowed room to grow? What would he make of a five-year sentence with the full attention of both his parents? Plenty, as it turned out. He blossomed in the spotlight during his solo act.
Though we enjoyed it when the older kids came home, we were happy to settle back into the routine we’d established as a smaller, quieter family unit.It turned out to be more fun than I’d anticipated, with ballgames, movies, lively times at the dinner table and just hanging around with nothing special going on.
During our son’s senior year of high school, I was acutely aware each time I filled out a school form or went to a school play—it was for the last time. But he was ready to take off—more than ready—and we were happy that he would be attending college in Portland, another short flight away. On his rainy moving-in day, while we were off doing parent orientation activities, our son set up his dorm room. He gave us a tour, we peeked around his new digs, and then it was time for  hugs and parting ways. When we said good-bye , it was not the teary Hallmark moment I had imagined for the last several months whenever I thought about it.This last send-off marked the end of one era and the beginning of a new one for all of us.
The day we got back from dropping off our youngest, my husband and I  looked at each other across the kitchen table and decided it was time to take out the leaf. Without our son as middleman, we couldn’t reach to pass each other the salt.At that moment, it hit home that we were, indeed, downsized. We dragged out our old copy of Cooking for Two, reviving a few of the recipes we’d made when we were newlyweds.
Those first few months, I missed seeing my son’s face every day. I missed hearing him sing “The Star-Spangled Banner” in the shower. I missed our shtick over the silliest of things.The hardest part was coming home after work to an empty house.
In winter, as the days grew shorter, I felt more than a little mopey. I hated those hours between the time I got home and dinnertime with my husband. I started writing more, often as soon as I got home from work, just to make that time go by more quickly.
It’s been many years now since we took out that table leaf. What else changed in our empty nest? With just the two of us here, we’re able to be more spontaneous about our plans. We sometimes choose to have dinner while watching TV, something that used to be reserved for the Oscars and the World Series. If there’s only a drop of milk left in the carton, we can’t blame a kid. A loaf of bread will go stale before we can finish it. We get the Sunday New York Timesand go out for coffee, sometimes blowing half a weekend doing nothing. Occasionally, we go to two movies in one day. We don’t have to set examples, give permission, or remind anyone to do things three or four times. Those water glasses left in every room are usually mine. We buy better booze.
And sometimes, as we used to do on those long-ago summer afternoons, we still wonder what lies ahead for our grown-up children. We gave them roots, we gave them wings, and the rest is up to them. 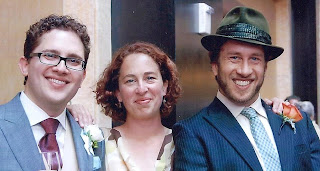 People told me when my kids were small that it all goes by in an instant. As a young mother, I never believed it. Each day seemed like pushing a rock up a mountain and the next day I got to do it all over again, with laundry.
Maybe it does go by quickly, and can be harder than anyone thinks, but the way I see it, letting children grow up and go is part of the sequence of events that starts the first time they reach for that shiny object, just beyond their grasp.
Filed Under: empty nest, family, Kids

More "Writin’ on Empty"? Yes, with your help!

What is Writin’ on Empty?  The long subtitle of the book explains it all: “Parents Reveal the Upside, Downside, and Everything in Between When Children Leave the Nest.”  I’m proud to be one of three mothers who brought this book into the world in 2008. My co-editors, Joan and Julie, met through the empty nest discussion… END_OF_DOCUMENT_TOKEN_TO_BE_REPLACED