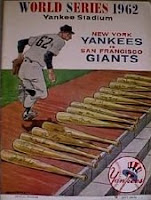 Not even going to talk about it

Update: 2014. This is something I wrote in 2005. During the opening ceremonies at the World Series Game 2 in San Francisco a couple of years ago, a giant American flag filled the field, held high by representatives of our armed services. A Marine who had lost both legs and an arm tossed out the… END_OF_DOCUMENT_TOKEN_TO_BE_REPLACED … END_OF_DOCUMENT_TOKEN_TO_BE_REPLACED