While I was still working at the phone company and taking classes at Cal, I answered a “roommates wanted ad” for a house on Sutter Street in Berkeley. It  was time to move out of the one-bedroom apartment I was sharing with a friend who was dating my ex-boyfriend. Awkward. Really, really awkward.
So I went to look at the house and discovered that two guys already lived there, and they were looking for two more guys. But did their faces light up when two girls came to look the place over! They told us later  they figured two girls would mean the house would be kept clean and who knew what other interesting things might develop. They really picked the wrong girls for that scenario.
We agreed to risk living together, and I moved in with my stuff and my cat– into a house with an old English sheepdog and a large aquarium, two male roommates, and a girl who labeled all her food. I think she wrote her name on every egg. The guys and I had a more liberal attitude about sharing food, and had to get used to those little slips of paper with her name on them taped to mysterious containers in the fridge, boxes of Cheerios, and cubes of butter.

I have fond memories of my 6’6″ male roommate storming out of the bathroom in his shortie robe, shouting my name as he waved a fistful of the undies I had left draped over the shower curtain rod to dry.It took some adjustments to live with men. And it took some adjustments to live with so many animals.We had to keep  Catrina, my cat, away from Sebastian, the large and ever-growing sheepdog. Catrina had in-and-out privileges through my bedroom window, and wouldn’t you know she came home pregnant.

I was almost twenty by then, and Catrina was my first real pet (sorry, Loretta), so I had no idea what to expect while she was expecting. I fixed up a dresser drawer for her in the corner of my room– made her a little nest and tried to get her to sleep there to get the idea that this would be an excellent place to have her kittens.
She wasn’t buying it.
Instead, she wormed her way into the muslin lining of my box spring, tearing a bigger and bigger hole until she could hop in and hang out. And so it was that late one night, I was awakened by some powerful mewing, followed by some little peeps coming from under my bed. I hopped up and turned on the light, just in time to see my cat trying to slink out of the room after dropping one kitten. I freaked out, woke up my female roommate and asked her what to do.
“You have to take her back in there and let her smell the kitten. She’ll know what to do after that.” So I brought Catrina back to the nest she’d made and told her to suck it up, get in there and do what cat mothers are supposed to do. And she did– licking that kitten from nose to tail, and then popping out three more. She cleaned them all off, picked them up by the scruffs of their necks and put them in the drawer I’d fixed up for her. She looked at me as if to say, “There. Ya happy now?”

I stayed up all night and then had to go to work the next day. I’m sure some of my customers were fascinated to hear their operator talk about having had kittens the night before.

My roommate came out of his room one day, shouting my name and letting me know that there were now kittens in his closet. But I don’t think he really minded. The underwear over the shower rod was another matter entirely.

How can you not love kittens? 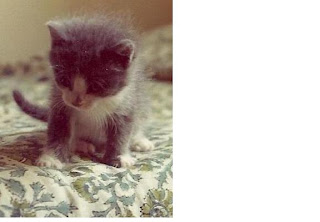 Filed Under: Uncategorized, Zero to Sixty in One Year
← Close Cover Before Striking
Into the Box Marked "Miscellaneous" →